"Even as she is developing into one of contemporary music's most compelling and insightful independent singer/songwriters, Alaria Taylor is quickly becoming an inspiration to women everywhere with her ongoing commitment to various female-oriented charity and music events in her hometown of Milwaukee, Wisconsin. Alaria's breakthrough Unfinished Business received 27 different national and regional awards including Billboard Magazine's World Song Contest, VH-1 Song of the Year Contest, Great American Song Contest, "CD of the Year" and "Song of The Year" nominations from the Wisconsin Area Music Industry. Tracks from the album have been played on over 100 radio stations throughout the world. Unfinished Business was produced by legendary, Grammy Award winner Joe Puerta-best known to several generations of pop/rock fans as a founding member of Ambrosia and part of Bruce Hornsby and The Range."
FYE E-Zine

"Alaria Taylor is perhaps the most decorated musician that you have never heard of. Bread or Water...one of the strongest EP’s of 2007. Taylor’s vocals achieve a Stevie Nicks-like quality. ‘Bread or Water’ is the song that should be present on any rock station’s rotation."
Neufutur Magazine August 2007

"…irresistible clapalong opener "One Hour A Day"….hopefully these type of accolades will continue in bigger and better ways as Taylor becomes a popular indie artist in the years to come….Taylor’s going to appeal to many listeners struggling to find voice for their own pain and survival."
Jonathan Widran/Allmusic.com

"...phenomenal collection of songs and a display of sheer talent. Alaria Taylor has a beautifully modulated, yet powerful voice, a blend of Gloria Estefan and Jennifer Rush.  ‘Clinging Like A Leaf’… finds its way insidiously into the section of your brain that makes you hum snatches of the tune through your daily routine."
Rambles: a cultural arts magazine - March 2007 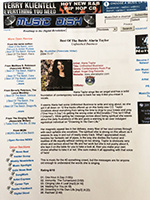 "Make no mistake, however, the songs are propelled and compelled by Ms. Taylor's evocative voice and songwriting skill which, lyrically, tend to show and not tell....Her songs show mature insight into the human condition and express these insights with flair and musicality."
Mark Kirby/MusicDish Industry e-Journal- October 2007
(Click image to see larger version)

"Grab your favorite blanket and a cup of coffee. Alaria Taylor’s recent release, Bread or Water, will keep you warm during those winter nights with her sultry voice and down-to-earth approach."
Innocent Words Magazine/December, 2007

"Immediately upon popping in the sophomore album of this Wisconsin native, one thing is obvious: she was incredibly influenced by Fleetwood Mac and Stevie Nicks. While I think Taylor's voice is more powerful, I can hear a bit of Stevie in there...The only disappointment is that there are only five tracks. I want more of this rising star!"
David McKinney/Music-Reviewer.com-December 2007 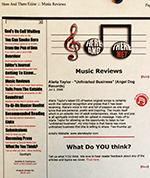 "Alaria Taylor's latest CD of twelve original songs is certainly worth the national recognition and praise that it has been receiving. Alaria's voice is rich and full of passion as she sings lyrics that are personal, poetic and inspiring."
Here And There Ezine - Music Reviews
(click image to see larger version)

"Alaria Taylor sings like an angel….say it like you mean it vocals….Her magnetic appeal lies in her delivery, every fiber of her soul comes through with each syllable she vocalizes….fantastic set of pipes…she sure makes it all appealing with that voice of hers!"
Keith "Muzikman" Hannaleck/Evolving Artist 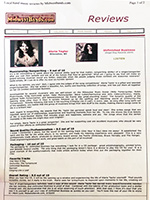 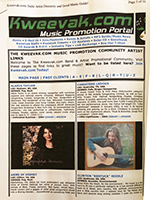 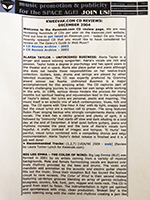 "Alaria’s vocals are rich and passionate….Unfinished Business is a major accomplishment for this amazing artist…. Her lyrics are personal, poetic and inspiring….Alaria Taylor’s debut release is finished and it’s a job well done!"
- Laura Turner Lynch/Kweevak.com

"While listening to songs for their contest(SOWI) I came across your song "Patiently." Very good song; well written; well composed melody; focused lyric; shows a lot of talent. Also, really like your voice. I’m interested in knowing a more about your current music career and plans for the future."
- Neil Diercks/Berklee College Board of Trustees, Manager A&R Warner/Chappell Music 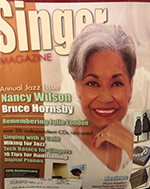 "The word that comes to mind when listening to Alaria Taylor's latest release, Unfinished Business, is 'classic'"...... Her vocals are mature and timeless with hints of Heart, Stevie Nicks and Belinda Carlisle...."
- KS Singer Magazine ~ issue #31 February 2005
The Voice of the Independent Musician & Songwriter

"Your talent is obvious. Stay the course. P.S. Not a judging criteria, but the vocal was superb."
- Judge for Billboard World Songwriting Contest 2004

"First off, the production and artwork on this album is superb. In this day and age, it's not enough to just have good, even great, songs if you want anyone to take you seriously, and Alaria Taylor grasps that. The production helm is manned by Joe Puerta (Ambrosia, Bruce Hornsby & The Range) and it sounds every bit as good as any artist he has produced. The heart of this CD, as it should be, is indeed the songwriting. The emotional "Clinging Like a Leaf" is also a stellar example of Alaria's wonderful voice, as well as her songwriting abilities. The best part of this album is that there really isn't a weak song in the bunch. A great listen that fans of uptempo and positive singer/songwriter artists will find a lot to love about."
- Mark Fisher, Indie-Music.com June, 2005

"Alaria has the ability to make you actually feel what she is saying, and uses her beautiful voice to its fullest."
- Broadjam Staff Member

Dear Alaria,
Thanks so much for your CD. You certainly know your craft. Wishing you all the best.
- Melissa Manchester

A solid CD worth taking along on an autumn road trip, December 24, 2006
On her CD Unfinished Business, Alaria Taylor presents us with a series of mostly hopeful, wise and serious songs supported by a very solid backing band. Her message (though a bit religious in nature) is not overbearingly preachy and her melodies are strong enough to keep the listener returning for repeated auditory servings.

There is a conceptual flow here that seems rather well thought out. For instance, Alaria's progressive rock song "Immunity" really stirs up the juices, quickly fades out and then we are treated to the pretty piano / vocal song "Clinging Like A Leaf". Somehow the pacing and transition works. This is accomplished no doubt by the producer. He is Joe Puerta the great bassist and co-writer for the late 1970's group Ambrosia. His familiarity with all types of musical genres (does anyone remember the masterful rock rhapsody "Dance With Me George") is just what was needed for Alaria's varied song stylings. It is also no surprise then that the arrangements are tasty - never overly cluttered and the musicianship and sound quality is polished. Puerta keeps the whole canon of songs locked into the adult contemporary mode but never allows for predictability. Thus, we are treated to the rock edged Chrissy Hind influence in "It Hurts", the cool Sade type flavoring found in "See Your Face", the concise slide guitaring, bluesy outing ala Bonnie Raitt entitled "Lose My Mind", the sophisticated major/minor ballad "Rachael" and the world / folk sounding closing track "Unfinished Business". There is also a hint of Karen Carpenter in Alaria's delivery which is very appealing. It's a soothing, warm quality not often heard in today's overly compressed, distorted over the top female vocals.

Though not breaking any new musical ground in the female / singer song writer world, this is nonetheless a solid CD worth taking along on an autumn road trip when you're by yourself. Nicely done.
Reviewer: John Tabacco (Centerport, NY United States)

Outstanding CD, Outstanding Talent!, December 23, 2005
I am a big fan of the modern female folk-pop singer and she is really one of the best. Here's why I love her CD ... 1. Her voice is rich, warm, and heavenly! 2. The songs are all originals she wrote. The changes are wonderful, not your typical 1, 4, 5 chord progression. 3. Her lyric's are heartfelt and she expresses them beautifully. They are at times funny, sad, desperate, passionate, joyful, etc. 4. The are quite a variety of styles on this CD which Alaria and her band/guest artists handle beautifully. Not only is it interesting to hear such variety on one CD, but you also realize you are not only listening to a talented singer, but a real musician as well! I highly recommend this CD!
Reviewer: KMH (USA)

Earthy & quirky, December 14, 2005
Sure, the earthy vocals and "new" folky sound are great. But the magic lies in the heartfelt and quirky lyrics. Just when you think you might know where a song is going, it takes another turn; and songs end up like the singer's hair--flowing with endless curls and curves cascading down into a glorious full-bodied 'do. Gee, your CD sounds terrific...
Reviewer: Joel Kopischke (Milwaukee WI)

CD You Must Hear, December 14, 2005
Take the opportunity to listen to this album. This is a great CD! The first time I heard Alaria was in Milwaukee a few months ago and her music has been on my mind ever since. The music is fun, moving, wonderful, great, and something you'll always remember.
Reviewer: Nadine (Texas)

Velvet Voice; Throughtful Lyrics; Emotional Delivery, December 11, 2005
Alaria Taylor is a gifted songwriter and entertainer, with subtle shades of Gloria Estefan... My personal favorite is "Patiently," where she weaves a bit of Gershwin ("Someone to watch over me") into her beautiful song. When you hear her sing the words "Waiting patiently," you can feel the yearning, but you just know something good is around the corner. Alaria is a wonderful performer and her work deserves a national stage... - Jim Bohn
Reviewer: James G. Bohn "Doctor Bones" (Grafton WI)

Girl! – You are looking and sounding FABULOUS!!!!!!!!! What a hot site! I love you! Alaria Hysteria is Coming to a Town Near You! Yours for a song,
- Tairre

Alaria! Wow! This CD is amazing – I love Clinging Like a Leaf, Waiting, Immunity, Patiently, One Hour A Day and Unfinished Business. I love Willy Porter on that last song. Your voice sounds killer! My god you’ve got some pipes! You should get these songs on the radio – I’m not kidding. Best of Luck. I will be making everyone I know buy one of these CD’s!
- Mary P.G.

Hi Alaria, I love your web site, it is a great site. It matches your great music.
- Tony Ansems

My favorite songs are: One Hour A Day, Waiting For You, & Unfinished Business. The guitars & instrumentals on See Your Face & Drowning are really awesome. Robin Pluer & Keith Pulvermacher add unbelievable backup vocals & guitar work on many of the songs. I like those handclaps on One Hour A Day too. Great job!
- J.T.F.

Hey Alaria – I was a fan of yours way back at the coffeehouse. Can’t believe I found you again! Best of luck to you with your new CD and all things in the future. I hope to see you playing out and about – I always loved your songs, your show, your voice and missed you the past few years. Congratulations!   Annie P.S. Great website!

Alaria…congratulations on making your dream come true! I love the CD, especially Clinging Like a Leaf, Rachael, Patiently and Unfinished Business.
- Carlie

Congratulations, and keep your fingers crossed for the WAMI’s and who knows what else next year.
- Joe Puerta

Alaria – the awards are very impressive. I had no idea you were such a good writer, although with your vocabulary I’m not surprised. Love the drive-thru song – made me laugh out loud. Although Clinging Like A Leaf is the one that will make you millions. Keep up the good work!
- JDS

I am really enjoying the new Alaria Taylor CD. The songs are beautiful, interesting and very unique…much like she is. I keep the CD in my car so I can listen to it often. Love all the songs, but my favorites are Clinging Like a Leaf, Patiently, Rachael, Waiting For You. Great arrangements, too.
- TMT